Kenny, son of Heidi Noyes and American racer-journalist Dennis Noyes, made his world championship debut in 2010. He began racing Dirt Track when he was 17 and didn’t get on the pavement until 2001 at the age of 23.

Kenny started racing Dirt Track in California on a Honda XR100 at the legendary Lodi Cycle Bowl. After working his way up to the 600 class and through the ranks from amateur to professional on the west coast, he got his chance to race the Nationals on the factory Lineaweaver Husaberg. In his rookie season Noyes won the 2000 Formula USA Pro Singles National Dirt Track Championship.

The following year an unexpected chance to try his hand at road racing came up with BQR Honda in Spain. With no roadracing experience, he started in the ultra-competitive Spanish CEV series and, in 2003, still riding with BQR, won the Bancaja Superseries 1000cc (Superstock) title. He moved to Yamaha for the next two seasons, winning the National Endurance Series on his R1.

During the following seasons Noyes became one of the top riders in Spain’s premier class. He won his first National in 2008 and continued to score wins, poles and podiums with Palmeto Kawasaki in 2009. With plenty of four-stroke experience Kenny was a clear candidate for the new Moto2 class.  He was signed by Team Jack & Jones of Antonio Banderas to race their new Harris-framed prototype in 2010.

Fourteen of the seventeen race tracks that composed the Moto2 World Championship were new to Kenny. He lead several laps of his second race, took the pole in his third, while finishing seventh twice, in Jerez and Catalunya.  In 2011, his second season in Moto2, he got a 5th place, his best result.

After 2 seasons in the CEV moving from Moto2 to Superbikes, Kenny won The FIM CEV Superbike title in 2014. Carrying the number 1 plate in 2015, after a win plus 2 podiums, he suffered a career ending crash. Now, 5 years later he is continuing to work hard on his recovery. In his first year Noyes raced in the 100cc class at the Lodi Cycle Bowl and he ran third behind the late Toby Jorgensen and dirt track legend, Chris Carr.  Proving that he had learned his lessons well, Noyes was ready to move up to the 600 class.

In his second year of the 600cc class Kenny signed to ride for Husaberg and went out of California racing from coast to coast in open and “Pro-Am” events.In 2000 Kenny won the Pro-Singles National Championship in his rookie year. He was on the podium nine times and had three wins taking home the title in what turned out to be an unforgettable year. Kenny had his World Championship debut in 2010 racing for the Antonio Banderas Team. He led several laps of his second race, took the pole in his third and finished seventh twice, in Jerez and Catalunya.

In his second season Noyes signed with Avintia BQR and improved his best finish in GP placing 5th in Valencia.

In 2012 Kenny went back to CEV in the Moto2 class and fought for the Spanish Moto2 Championship. He was on the podium in 4 of the six races and ended the year third in the points table.

The next season Kenny raced for a top team in the Spanish Moto2 Championship  and then returned to the Superbike class with the Speed Racing team and ended the year with a double podium at Jerez. After winning the National Pro-Singles title Kenny got a call from overseas to try his hand at Road Racing in Spain. He had no experience on the pavement but Noyes decided to go for it. He worked hard with his new team in 2001 and 2002 as he adapted his aggressive dirt track style and discovered the secrets of tire selection and road bike set up.

In 2003 Kenny had his breakthrough season winning the Spanish Superstock Series. He was on the podium six out of seven races, winning three of them.

The following year, Kenny moved up to Spain’s premiere category. His progress from year to year took him into the group of top Spanish 1000cc riders.  He ended the 2007 season by leading the final round for half of the race and finishing fourth.In 2008 Noyes was one of the clear favorites to win in Spain’s premiere class and started the season with a pole position, a new track record in Valencia, and three podiums.  He continued to score wins, poles and podiums with Palmeto Kawasaki in 2009. In 2010 he got his Grand Prix opportunity with Team Jack & Jones by Antonio Banderas in the inaugural Moto2 season.After his Moto2 career, Kenny decided to go for the FIM CEV Superbike title in 2014. He signed with PL Racing to race their Kawasaki ZX-10R. He won three races and got the crown by beating Carmelo Morales and Iván Silva.

Noyes started 2015 with the #1 plate and he was the man to beat, winning the first race of the year and getting two more podium finishes. He arrived at Aragón’s round focused on the win, but then suffered an accident during Warm Up which cost him his sports career. Currently he is working on his recovery program and is making positive steps every day.
Click here to know more about his road to recovery. 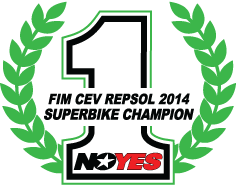 If you can help me with my recovery, please donate here
KENNY NOYES
© 2023  All rights reserved
ContactCINTA AMERICANANOYES CAMPTERMS AND CONDITIONSPrivacy Policy