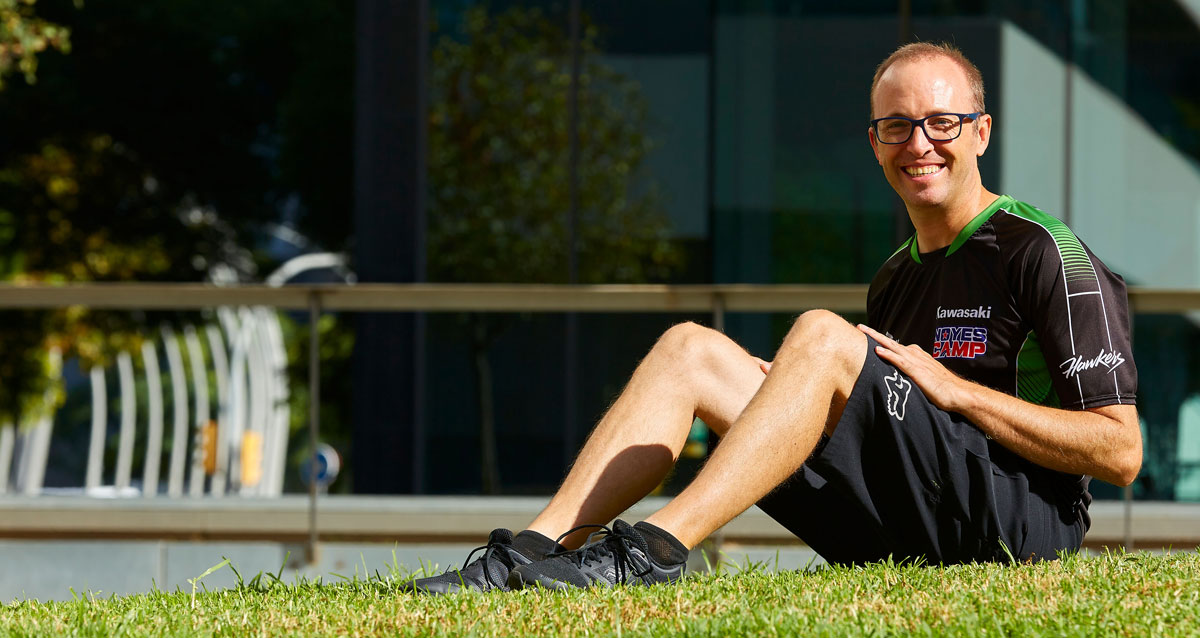 My name is Kenny Noyes and I was a professional motorcycle racer. On the 5th of July, 2015, when I was Spanish Superbike champion, I crashed during the morning warm-up of race day at Motorland (Alcañiz, Spain). I don’t remember anything but from what I have been told it was a brutal accident with the bad luck that my bike hit the protection and came back toward me. My 1000cc Kawasaki hit me at the estimated combined speed of about 80 mph.

I owe my life to the rapid and efficient medical team at the track. I was taken in a helicopter ambulance to the intensive care unit of the Hospital Clínico Universitario Lozano Blesa in Zaragoza. I was in a deep coma (Glascow level 3, the most severe on the scale). They assure me I was between life and death, but 17 days after my fall, according to the medical report, I opened my eyes. After 4 weeks in intensive care, still only minimally conscious, I was transported by ambulance to the Guttmann Institute in Badalona (Barcelona).

My first memories after the crash are from the Guttmann and are confusing. I didn’t know who or where I was, but I did know that I was a motorcycle racer and that I had had some kind of accident. Instinctively I looked at my feet and moved them, so I knew I wasn’t paralyzed…. and I thought, “Then, why do they have me confined here?” I tried to escape but without success because I couldn’t even begin to get up. According to the doctors, I suffered injuries that were considered permanent, but for almost 2 years I have continued to improve so that I will once again walk and talk well.

I am better and full of hope, but at the same time I am aware of the economic situation of my family.  We had no idea how long this road would be and we still don´t. I train at home but I know that in order to continue recuperating I have to continue to work with the professionals who are guiding me through my rehabilitation. Unfortunately, the insurance of the racing federation only pays part of the costs of the first 18 months (a year and a half). The costs paid until now have exhausted the resources of my family and now we lack the means to continue the rehabilitation program.

It is frustrating because I am steadily improving and making good progress, working with specialists in physical, cognitive and speech recuperation.

If you can help me with my program, please donate to my GoFundMe campaign.

My Story, My Goal and My Hope

I was born in Barcelona in 1979 and lived until I was 16 in Miraflores de la Sierra (Madrid), I rode but didn’t begin to race motorcycles until the company (Dorna) my father worked for sent him to California to organize the United States GP in 1994 at Laguna Seca.

My father, who was a motorcycle racer and Spanish endurance champion in 1986, wanted me to play baseball or basketball. I did play baseball for the Spanish team in the 1990 European Championship and basketball at my high school in California. But ever since I was very young, always, my life’s passion has been motorcycles…. gasoline, sliding, speed.

I began racing flat track on dirt oval tracks in USA, making ten-hour trips in a small pick-up to race at the Lodi Cycle Bowl. Although I won races there, my first important results came as an amateur at the end of the 90s. In my first year as a professional I won the national Formula USA title, but my goal was always to road race.

With no experience on asphalt I began as a rookie in the Spanish Supersport Championship of 2001. It was truly difficult. Now it gives me a lot of satisfaction to know that I won races and titles. I rode for two seasons in the Moto2 World Championship, started on the pole at the French GP of 2010 and I took 5th place in the Moto2 GP of Valencia of 2011. But my most important achievement was winning the 2014 FIM CEV International Superbike Championship on a Kawasaki ZX-10.

Of the 2015 season, that opened with a victory in my first race carrying the #1 plate, I remember almost nothing. Little by little, fragments come back…. the win in Portugal, moments in the garage with my team, leaving home to go with my wife to my last race.

During the first phases of my recuperation I was under the illusion that I would race again. But after doing a few laps on the go-kart track on my 140 and being conscious of my situation, I realized I would never race again, I would not be “fast” anymore.

From that moment, I realized that there is another life beyond the race tracks and I want to share with my wife the many years we have before us. When I have recovered. My main goal is to improve so much that I will be able to work again and if it is in the world of motorcycles, so much the better. But my short therm goal is to be able to go to the “Club Metropolitan” gym….. driving the car myself. Also, I would like to visit my parents in California. I haven’t taken a long trip since my accident. But these are physical objectives. As far as ongoing projects now, to present my autobiography that I am writing!

Essentially, this book is my autobiography. There are many stories and experiences before and after the accident, including some from my childhood. My racing carrer and the long process of recovery. The purpose of this book is to show that as long as there is life and you can feel it, you must fight.

‍I have been lucky, very lucky. I am fortunate to still be here…. and I want to win this race of life.

If you can help me with my program, please donate here
KENNY NOYES
© 2020  All rights reserved
ContactCINTA AMERICANANOYES CAMPTERMS AND CONDITIONSPrivacy Policy